When a masked superhero jumps from one skyscraper to the next, saves lives and suddenly breaks into song and dance, you know that you have arrived in Bollywood!

Released in June 2006, Krrish is Rakesh Roshan's sequel to Koi Mil Gaya - Bollywood's first sci-fi movie. Koi Mil Gaya was the story of Rohit - a special boy with special needs, who after making contact with a UFO (Jadoo, meaning Magic) suddenly gains the power to be a 'normal' child like everyone else. Naturally, there was a love interest, Nisha played by Preity Zinta.

In the sequel to Koi Mil Gaya, Krrish is the story of Krishna - the child of Rohit and Nisha. After his parents die, Krishna grows up taking care of his grandmother (Rekha). Growing up, he soon realizes that he has inherited the superpowers that were transferred to his father by Jadoo. The film shows how Krishna deals with his powers and saves the world from a mad scientist, Dr Arya (Naseeruddin Shah) 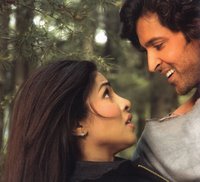 ...and of course, since this is Bollywood, there is a romantic plot where Krishna falls in love with Priya (Priyanka Chopra) who plays a tourist visiting Singapore - where the film is set.

Last week I watched Superman Returns. It was fantastic - I thoroughly enjoyed it, considering the fact that I don't usually enjoy action flicks like that.

I think it's awesome that Bollywood has its own superhero. And who better to play it than my #1 hunk, Hrithik Roshan!

# 1 hunk indeed!!! I watched the trailers a while ago. He looks really really really hot!!!! Superman aint got nothing on the bir K

tiwonge - the music is not bad either...
about the leading lady in this film, priyanka chopra (not one of my favourites) but this is the first time the two are being paired on-screen. so that's also something else to look out for. is the chemistry there or not?

tiwonge - if/when i get the dvd, we should watch it together ;)

this should be interesting, i always imagined Hrithik as a man in the office, clean cut, arrogant (in a nice way. so for him to take on a superhero figure blows me away, this i would like to see. atleast they keep the romance aspect of it otherwise i would not be thinking of watching it. i mean what is Hrithik without love...infact we are all nothing without love.

colleta, i hear u! he looks like a husband i'd like to have one day - neat, clean cut, wearing a suit and tie sitting behind a desk!

aaah, the fantasy lingers on!

honey, by now u should know that bollywood isn't bollywood without LUUURVE ;)

Was this film even a HIT?
I didn't hear much abt it after, but maybe.......? a hit, even a semi hit ?
oh gosh i could never watch this, never
*tear rolls down the cheeks
but good luck to bollywood in the "phhuture"