Bollywood's not butting out 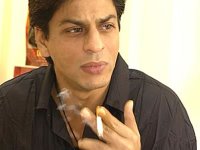 Most of them do it – from the Big B to the King Khan. Even leading ladies like Manisha Koirala and Preity Zinta do it. But what’s the attraction? Is it really a stress reliever? Or is it just cool to be seen with one? Our favourite stars can’t seem to butt out, but what’s the big deal with the death sticks?

May (even though a few months ago) was declared “Anti-Tobacco Month”, and I decided to take a look at your favourite smoking stars and why anti-smokers are blaming Bollywood for the increase in youth smokers.

Before, films depicted mainly villains with a cigarette casually hanging 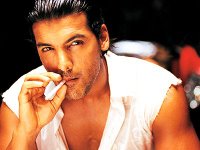 from their lips. Nowadays, hero’s like Shah Rukh Khan and John Abraham are also shown with the death stick dangling from their mouths. Even beauty queens like Kareena Kapoor and Tanushree Datta aren’t afraid to be seen lighting up on screen.

Manisha Koirala, known to be an avid smoker, has appeared in numerous scenes where she was seen puffing away. She smoked in films like Company and Market – where she was kept company by her co-star Suman Ranganathan. In Chori Chori Chupke Chupke, Preity Zinta played a bubbly character, which soon went downhill when she was seen taking to the cigarette. Even sweet girl Katrina Kaif in her debut film Boom wasn’t seen without a cigar in her hand, as did her co-star in the f

ilm, Madhu Sapre. In Main Aisa Hi Hoon, Esha Deol didn’t seem to have any qualms with taking a few puffs in front of her on-screen husband, Ajay Devgan. Kareena Kapoor, clad in her famous re

d and blue sari was also seen with smoke emerging from her lips in Chameli.

It’s interesting to note that the films where heroines are seen smoking are when they are playing prostitutes!

For years, Bollywood films have proved to be clean, wholesome entertainment for audiences all over the world. But some people are questioning whether the glitz and glamour of Bollywood is detrimental to our health. 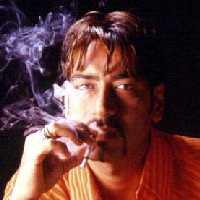 The World Health Organization has estimated that smoking is linked to more than 800,000 deaths in per year. Victims are apparently men aged between 25 and 69. It is said that the portrayal of attractive people smoking has definitely influenced young people. Attractive people? I’m thinking Shah Rukh Khan, Kareena Kapoor, Preity Zinta….the list simply goes on!

A study has indicated that Bollywood is responsible for glamourizing smoking. Since Indian film stars are role models to thousands of people, it is understandable that they have a lasting impact on children and young adults, but can our Bollywood stars really be held responsible for promoting smoking?

The relationship between Bollywood and smoking goes back since early days, but these days people are questioning the recent ban on smoking scenes in Indian films. A few years ago, the Indian government outlawed all images of smoking in Bollywood films and television shows. Surprisingly, this law was attacked by film-makers like Mahesh Bhatt who said that it was the tobacco companies, and not the movie stars who were to be blamed for the youth wanting to follow the trend of their on-screen idols.

However, Bollywood icons are so popular that their off-screen lives influence their masses as well. One such star is none other than Shah Rukh Khan whose lifestyle has impacted millions of fans around the world. Khan declared that he would try to quit smoking on the eve of his 40th birthday, and he appears to be keeping to his goal. From a whopping 70 to 80 cigarettes a day, he apparently only smokes three to four now.

Another teen heart-throb smoker, Vivek Oberoi has been noted for saying that, “Smoking a cigarette does not make anyone cool…it only makes you ill.”

An advertisement in carries a warning from Urmila Matdonkar who says, “Every cigarette reduces life by three minutes. Isn’t that scary? If you’re not scared, then you are not brave, you are foolish.”

Earlier this year, an anti-smoking activist group in threatened legal action against film giant, Amitabh Bachan for smoking in a movie poster of Family – Ties of Blood. 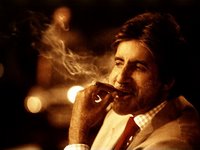 But it still baffles our minds. If the stars are so against smoking, why are so many of them still puffing away?
at August 15, 2006

i can not believe this, its funny how, kissing is not allowed on screen but u can smoke all u want. im ashamed of my bollywood sisters who allow themsleves to be poisoned by the death stick.

you make a good point, actually :)
i was watching SALAAM NAMASTE (preity zinta & saif ali khan) with my mum the other day... they were about to kiss, and my mum was like, "they're not going to kiss"...and 3 seconds later, they were so into it!

i'm looking forward to saturday & hope you are too!

The ban on Smoking on-screen has two important aspects:
1. Directors say its an attack on their creative liberties. To a certain extent it is true. Some characters do require to smoke, imagine Sherlock Homes without his pipe! But I personally welcome the ban on on-screen smoking. The average age of an Indian viewer is about 23. In metros, the schoolchildren are big fans of movies and they want to imitate whatever goes on in the movie. Hairstyles, fashion accessories and...yes, smoking!
2. It is unofficial, but the inclusion of smoking is an advt campaign by tobacco companies. In India, they can not advertise in any direct manner whatsoever by law, so this is another way of making it glamourous. IN most of the recent movies, along with the smoking, there IS a short glimpse of the BRAND of cigarrete (cigeratte pack shown). Now if your character needs to smoke on screen, let him/her smoke; you definitely dont need to show which brand is being smoked, do you?

In almost every movie/TV show we watch, it's a platform for advertisers to display their products to us. Whether it's cigerettes or cooldrink cans, the brand is alwasy discretly (or not) directed towards us.

But nonetheless, I was just pointing out the extent to which smoking is done so openly on the big screen.

nameste sheetal
i liked your blog.
i invite you to visit my blogs.it will be encouraging if you can link me to your blog.
your blog is on my bollywood blog link-blogywood!!!
warm regards.
cheers!!!
jhaji.

thanks for linking me to your blog. i have done the same...

Hey there. Loving the bollywood stuff. Have you seen my redesign of my blog?