One of the main ingredients for a Bollywood blockbuster film is a good cast. If it’s a love story, it helps when the hero and heroine share some kind of rapport on screen. Bollywood stars are treated like quazi-Gods in – which is no surprise. They are role models and entertainers for millions of people around the world. Some stars share an on-screen chemistry with their co-stars, making them unique and popular. The question is – does onscreen chemistry mean that the same rings true off screen…or is it the other way around? 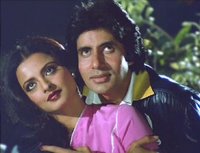 The silent affair between the superstar and the sultry sex goddess still remains a hot topic among gossip mongers today. Earlier films of the duo include Mr Natwarlal (1979) and Suhaag (1979). The chemistry between Big B & Rekha was very evident on screen, with their real life love story beginning on the sets of Do Anjaane (1976) – their second film together. The real life love triangle of Amitabh-Jaya-Rekha was a regular occurrence in tabloids. The three even appeared in Silsila (1981) together. However, Bachan being a doting husband and father as well as being under severe media and family pressure, ended his torrid love affair with sex siren, Rekha. This famous love-triangle is still rife today and can be seen when any of the trio are in one place at the same time. Camera crews almost never fail to capture their reactions towards one another. 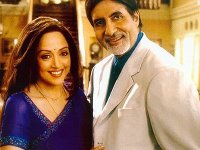 Audiences fell in love with this duo again after Baghban (2003). They set the trend with elderly couples in love getting as much footage as the new generation of stars, and continued their on-screen magic in Veer-Zaara (2004). Also good friends off screen, the two have been paired in a number of films in the past, including Kasauti (1974), Sholay (1975) and Desh Premi (1982). Bachan and Malini are also appearing in Ravi Chopra’s forthcoming film, Babul (2006). Rumour has it that they have also been signed for another film that will reportedly be the Hindi version of Clint Eastwood’s film, The Bridges of Madison County (1995). 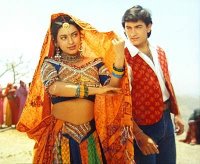 Since their roles as Raj and Rushmi in Qayamat Se Qayamat Tak (1988), these two talented stars can be guaranteed a hit if either was in the film. Daulat ki Jung (1992) and Hum Hain Rahi Pyar Ke (1993) are some of their earlier films. The two were paired again in Ishq (1997), also starring Ajay Devgan and Kajol – another famous off screen couple.

It’s no surprise that the movies these two have appeared in have all been box office hits. Their exuberance and vigor match amazingly with each other and seem to be the perfect on-screen couple in the industry. They became the most sought-after pair in Bollywood after the record breaking success of Dilwale Dulhaniya Le Jayenge (1995). Who can ever forget the song, “Tujhe dekha to ye jana sanam” with the two being reunited in the fields of ? Their earlier films include Baazigar (1993), Karan Arjun (1995) and Kuch Kuch Hota Hai (1998) – a love triangle between Khan, Kajol and her newcomer cousin at the time, Rani Mukherjee. The last film that this dynamic duo appeared in was Karan Johar’s Khabi Khushi Khabhi Gham (2001).

Being good friends probably helps when you produce box office hits as these two have. But let’s not forget the chemistry between them. This is evident in Darr (1993), Duplicate (1998), Phir Bhi Dil Hai Hindustani (2000) and Yes Boss (1997) to name but a few and are just some of the hits between the two. What more can you expect when you combine cute and bubbly with charming and suave? One of the recent films the two have appeared in, as in-laws, was Paheli (2005), also featuring Rani Mukherjee. The onscreen pairing continued off screen as well. The duo, along with Aziz Mirza, formed a production company – Dreamz Unlimited to produce their own films.

Salman and Madhuri began their on-screen magic in the early 90s, with films like Saajan (1991), and Dil Tera Aashiq (1993). But it was Hum Aapke Hai Kaun? (1994) that became one of the biggest hits in the history of Bollywood. Khan and Dixit soon became one of the favourite couples at the time. The two were paired on-screen as friends years later in Hum Tumhare Hai Sanam (2002) which also starred Shah Rukh Khan. 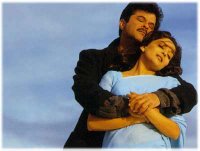 One of the most classic and famous couples in Bollywood is undoubtedly Anil Kapoor and Madhuri Dixit. Their on-screen history dates back to the late 80s, with films like Tezaab (1988) and Ram Lakhan (1989). The 90s saw only two major hits in the 90s, Beta (1992) and Rajkumar (1996). The duo’s dance sequences have been noted to be some of the best songs in Bollywood to date. Their latest film together was Pukar (2000), also starring Namrata Shirdokar. 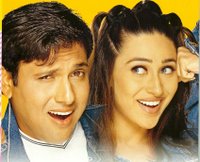 If you add Govinda and Karisma Kapoor, you’re going to end up with some kind of David Dhawan comedy. Whether it’s Coolie No. 1 (1995) Saajan Chale Sasural (1996) or Hero No.1 (1997), you’re bound to find these two dancing on the streets of Europe, or singing to each other, “What is mobile number?” as they did in Haseena Maan Jayegi (1999) – also starring Sanajy Datt and Pooja Batra. The two were paired again in Shikari (2000), an action film also featuring Gulshan Grover.

Perhaps it was their off-screen romance that exuberated on screen, but after “Tu cheez badi hai mast mast” in Mohra (1994), fans all over the world watched their off screen romance develop. Even after “Dil mein hain tu” from Davaa (1997) with sexy song sequences in water, it’s a pity that their fiery on-screen presence didn’t last too long in the real world. Their last appearances on screen together was in Keemat and Barood (1998).

They’re every teen’s heart throb. Hrithik’s biceps are enough to send girls into a frenzy, and Kareena’s sultry looks are bound to make any guy drool. Is it because of their great physique? Or perhaps the fact that they are both amazing dancers? With Hrithik in his black leather ensemble and Kareena’s sexy red number, the two danced to “You are my sonia” in Khabi Khushi Khabhi Gham (2001) and were paired as a romantic item in the film as well. They also appeared in two love triangles - Mein Prem Ki Deewani Hoon (2003), (Hrithik-Kareena-Abishek) and Mujhse Dosti Karogi (2002) (Hrithik-Kareena-Rani). The two look sensational together on screen. They have good looks, good bodies and let’s face it - their songs can have anyone jumping out of their seats! Their earlier film where they were paired on screen was in Subash Ghai’s Yaadein (2001). 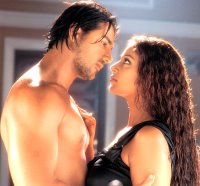 Amitabh-Hema Malini
and
Shah Rukh - Kajol
are the best of them all; in my view.

I still think my wife Sonali Bendre looks the best on screens...

shah rukh-kajol any day. Preity has nothing on kajol. personally that what i think, but im also biased towards Hrithik, but with Rani Mukherjee, i loved them in Mujhse dosti karoge. and i think she is more beautiful than kareena

what do u guys think of Bobby deol? and Saif Ali khan?

do u know that Sushmita Sen smokes??? really i didnt imagine she could do such. but ohh well many have fallen, she is jus too lovely to smoke man.

colleta, most of these bollywood actresses smoke! in fact, maybe the next story i post on my blog should be about 'stars who won't butt out'!

bobby deol is so-so...i don't really have any specific feelings towards him.

as for saif ali khan, he's just cute! you should watch SALAAM NAMASTE! his co-star is preity zinta. but hmmm, i'm getting the feeling that you don't really like her. am i right?!

rani is ok. (did you know she is kajol's cousin?) and as for kareena, well...she is growing on me!