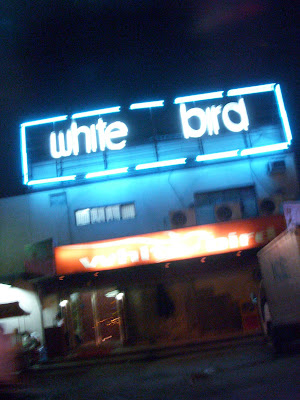 After the Amazing Show, we rested a bit at the hotel. And around 22:30, my aunt and I decided to go out shopping. On our way to the market, we greeted a group of guys that were near our hotel. One guy appeared to be advertising a bar... and asked if we wanted to go to one. We thought - Why not? The place was called White Bird.

We were ushered into the bar... and seated on a couch facing a stage. We were given menus and ordered a drink. And then... there were male dancers on the stage in front of us! The manager came to introduce himself to us and came to sit down next to me. He was dressed in pants and blazer ...and earrings. He pointed to a room with a large window. There were about 15 guys wearing white vests. The manager told me that I could choose any guy I want to dance for us. (I didn't...)

Anyways... there was music... there was dancing...there was a pole. 'Nuff said! One guy got off the stage to dance in front of me, but when he got too close we chased him away.

After we paid (and we were cheated!) ... we hurried out of there so fast and agreed that we'd put it down to life experience. We still went shopping after that! Only got back to our hotel around 2am and chatted while eating junk food ;) It was a great night!
at February 05, 2009

sounds like you guys had fun. i just wish i was with.

Oh, you poor guys! But, it was funny. Hope that won't keep you from coming back to Manila. There are lots more better places you could see. :)

just what were u women thinkin,to go to such a bar, had fun rite