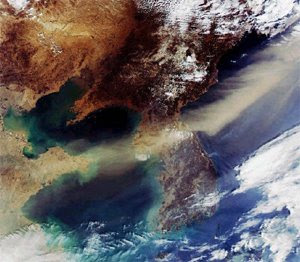 The following article is from the KBS site.

Spring's Unwelcomed Guest
The yellow dust season has come. The clouds of sandy yellow dust that come from China in the dry spring season can cause various skin and respiratory problems. Accordingly, anti-yellow dust items sell well around this time of the year. According to industrial sources, since the yellow dust phenomenon was observed across the nation on March 29, sales of masks, baby carriage covers, nose-washes, strips to seal up windows, etc. have remarkably increased.
Anti-yellow dust items?
Spring has brought with it an unwelcome guest. Yellow dust, called “hwangsa” in Korean, is an annual phenomenon. The dust particles cloud clear skies, causing respiratory ailments. Anti-yellow dust items refer to items aimed at limiting the damage of yellow dust. Ordinary masks, as well as those specially designed to cover the entire face and even the neck, sell well. Baby carriage covers, nose-washes to prevent colds, hwangto (yellow earth) paste packs for skin care, and strips to seal up windows and doors, are also quite popular.

“Dust rain” and “blood rain” - historical records of yellow dust
The country’s weather agency used the term, “yellow dust,” for the first time in 1954. Due to the short history of using the word, many people suspect it might be a recent phenomenon. However, the “yellow dust” phenomenon can be traced back to 2,000 years ago.
An ancient record says “dust rain” fell in the 21st year of King Adala’s reign (A.D. 174) during the Silla Kingdom. The “dust rain” referred to what we call “yellow dust,” and it is the first written record of the phenomenon. After that, it was often mentioned in ancient records as “dust rain,” “yellow rain,” “red snow,” “dusty mist,” “blood rain,” etc.

Why does the yellow dust phenomenon take place in the spring?
In the areas where the yellow dust originates, it rains in the summer, plants take firm roots in the autumn, and the ground gets frozen in the winter. In spring, however, the frozen earth melts, producing large quantities of dust particles less than 20 µm in size.

Positive and negative effects of yellow dust
Yellow dust causes various damage - visibility problems, respiratory and eye troubles, malfunctioning of precision equipment, damage to farming, etc. It was said that contaminated heavy metallic dust, foot-and-mouth disease or birds flu viruses might spread with the yellow dust. This has turned out to be a groundless rumor, but shows the degree to which Koreans fear the effects of yellow dust. Yellow dust is not 100% harmful, though. Lime and other alkali substances contained in yellow dust neutralize acid rain, prevent acidification of soil and lakes, and provide organic salts to plants and marine planktons.

you have been writing all along? wow! i just came to see if the blog was still there :P :)