These days when I want to swap contact details with someone, I just take it for granted that they have a cellphone number and/or e-mail address. If they don’t, I’m gobsmacked! With the amount of Internet Cafés around the country, almost no one has an excuse for not keeping in touch with family and friends.

My family got the Internet at home about 11 years ago when not many people even knew what it was. The more addicted I became to the Internet, the higher our phone bill was for the month! And yes, I am ashamed to say that I became slightly addicted to chat rooms. Much to my school friends’ envy, I was meeting people from all over the world and started making e-pals (the online version of pen pals).

I met my first e-pal in a chat room. He was 16, lived in Canada and was a DJ. I 'met' 2 of his other friends, and believe it or not – ten years later, we are all still in contact!

Networking sites have been around for a while, and after getting e-invites from friends, I usually give in and register. I have done it all – hi5, myspace, Orkut and the rest. But the most addictive and time-consuming site of late is Facebook. Through Facebook, I have been reunited with nearly half my matric class. People who I thought I’d never see again and who I have been trying to track down are all of a sudden being added to my growing list of friends. 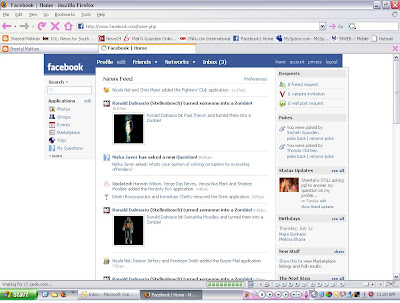 I have even joked with some of my friends that I need to go on a Facebook fast! It has really become the new cyber drug of internet users all over the world. What starts out as just logging in to check messages turns into a whole hour of random bantering with long lost friends, seeing who’s added new photo’s to their profile and who has left a message on my wall. Many companies have even started blocking the site, which does not allow employees to log on.

One of the main features of the site is that you can set your privacy settings so that only people you accept into your friend network will be able to view your profile. Once you’re on your friend’s profile, you can leave a message on their ‘wall’, send them a private message, maybe send them a virtual hug, look at their latest photos and generally see what they’re up to or what mood they’re in by checking out their status. With the increasing features appearing on the site, it’s no surprise that an hour can fly by once you’ve logged onto facebook.com.

And for friends who don’t want to be entwined into the addictive world of Facebooking, I have another means of keeping in touch with them – via my blog (www.sheetalmakhan.blogspot.com) Without the hassle of sending dozens of individual e-mails and photographs, I simply update my blog. Anyone can log on, see what I’ve been up to and leave comments on various posts for me. This will be especially useful when I embark on my travels within the next few weeks and I will be able to keep a travel journal of some sorts.

The world is shrinking and it’s no longer surprising to bump into a long lost acquaintance in a foreign country. Thankfully, my family and I are not technophobic and I am a self-confessed techno-addict.

I check my e-mail throughout the day and now and again sneak in a quick chat with a friend who’s online. Blogging has become a part of my routine, while Facebooking has become a habit I am seriously trying to ween myself off from!