Angelina, my co-teacher picked me up for school. Upon arrival, we had to take our shoes off and wear other slippers (so as not to bring outside "dirt" into the school). I made a mental note to buy my own pair later that day. I met the vice-principal and was whisked off to a room where a young boy stood behind a camera on a tripod. It was pointed to a podium, where the vice-principal spoke into the camera.

It all happened so fast, which is why I don't have pics ....

As the vice-principal said something, Angelina said that I should give a short introduction about myself.

....then I realized what was happening. The school has their own broadcasting system and instead of them going to assembly (as we know it in South Africa), messages are broadcasted to students who are sitting in their homerooms. Before I knew what else was going on, I was pushed to the podium, and said - "Good Morning, I am Sheetal Makhan from South Africa and I am the new English teacher". Then I was pushed out the room and taken to the 6th grade teacher's room.

I only realized the effects of my "on screen appearance" when I walked down the passage and nearly every student stared at me, pointed at me ... as if to say, "it's HER!!!" When the children passed me, the stopped in their tracks and bowed to me, saying "Ahn-yang-ho-say-yo" which means, HELLO in Korean. 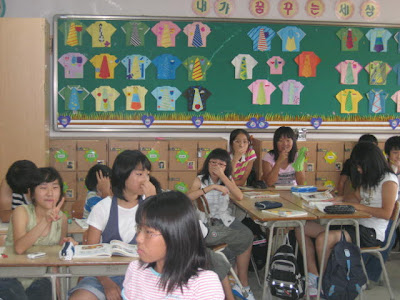 I went to meet the principal, who spoke to me in Korean..thank goodness for Angelina who translated .... hmmmm, he even said that I must enjoy my stay in Korea and that maybe I will find a good Korean man to marry, cause Korean men are very good people.

.... seriously, did someone alert my principal that I'm single?!!!