Now that I've settled down a bit, I can be brutally honest about my feelings when I just arrived here...

On Saturday, after dinner with Angelina (my co-teacher), Mr Kim (school officer) and his wife, we went to a store to buy things like cleaning agents, bins, iron, ironing board etc...and there was someone from the store who helped us back to my apartment with all our things (basically a few metres down from where I live. 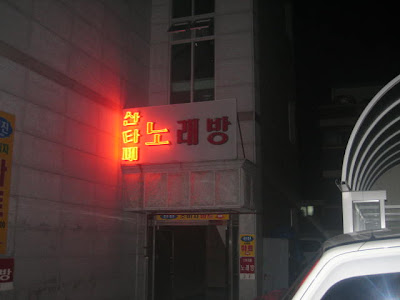 Remember, I was jetlagged...I had only arrived a few hours earlier, so my body hadn't yet adjusted to the time difference. At 00:00 I was wide awake and asked the man who worked at the PC bang where I could get a call card. He looked at me blankly and said something in Korean. Then I mimed to him... I said SOUTH AFRICA.... and pointed to the phone.

A girl was watching me, and I tried asking her... she told me to follow her. I followed her to a cafe where there was a man, woman and a baby. I said SOUTH AFRICA...PHONE. The man said to me, "SAUDI ARABIA?" Thank heavens he had a chart in his store, so I point to the SA flag, and he sold me a call card.... and he let me use his phone...

..I called home, and spoke to my brother. My folks weren't home. Then I called my mother on her cell... and while talking to her, I thought - OH CRAP I don't know where I am and how am I going to get home? It was 00:30 now.

Still talking to my mum, I saw 2 Indian guys pass the store and I waved frantically at them. They were from Bangladesh and their English was none the better. SUN JIN APARTMENT, I repeatedly said. NO ONE as in NO ONE understood what the hell I was saying.

I mentally prepared myself to be raped or mugged... I mean, what the hell was I doing walking around the streets of Sinchen-dong on the night that I arrived? I was close to tears. I had no idea where I was.

Then....the guy who took my parcels to my apartment earlier saw me, and noticed I was lost and he walked me home. I was shaking. I was tired... hungry...and needed a shower.

....so around 01:00 I had a shower. I was so upset about getting lost that I didn't care that I couldn't find my shower gel. I used shampoo. (Manuka shampoo from the Body Shop to be precise)

My apartment was bare and eerily silent. I went upstairs, sat on my bed and thought - OH MY GOD....what have I done coming here? How will I ever get the hang of things?

I fell asleep for an hour, and woke up @ 3am. It felt like I slept for 6 hours. I was frustrated and the silence was deafening. I went back to the PC bang, and made sure I knew where the hell it was. Well, it's really just straight down the road from where I live.

I needed to get onto MSN / GOOGLE TALK. The man had no idea what I was saying when I said GOOGLE TALK? I burst into tears in his face... and he gave me a cup of coffee from the coffee machine. My friend, Jayme was online and I asked her to call my brother to get him online.

He logged on and I said - WHAT HAVE I DONE COMING HERE? Then I asked him to call Cliff & YunOck, who spoke to me..and YunOck spoke to the guy working there in Korean. For the next 4 hours, I sat at the PC bang (5am....6am...) I couldn't bare going to my apartment.

It's now Sunday... at 7am, I went home... fell asleep at 8am and woke up at 3pm. Within 10 minutes of waking up, I went back to the PC bang and sat there till midnight. I downloaded Skype, and spoke to friends. I even managed to upload pics on a PC that was 100% in Korean.