On Saturday, July 3 2010 it was all about USHER, baby! The singer was in Seoul for a one-night-only concert.

Truth be told, I've never really been crazy about him, but have appreciated his hits - namely Yeah, Burn, Love in the Club and more recently, OMG.

I was disappointed with our seats (I didn't book the tickets). We were the first row in the upper level which means that there was constant traffic in front of us.

The concert started about 15 minutes late and up to an hour later, people were only just arriving...and not even trying to duck for the people they were blocking.


The concert was sponsored by Hyundai Card Super Concert - same promoters who brought the likes of Beyonce, Craig David and Whitney Houston. Beyonce and Whitney's concerts were great - in terms of stage and production. Whitney's performance, however was downright disappointing. 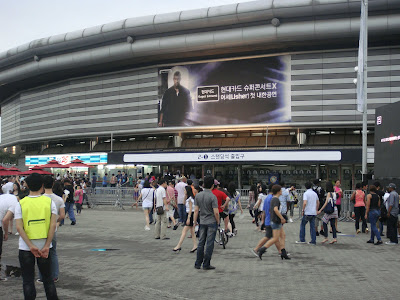 Usher was accompanied by sexy male and female dancers who I thought could put The Pussycat Dolls to shame.


Dressed in all white throughout the concert (except for the finale), he took off his jacket after a couple of songs leaving him with only a white vest. This, of course, resulted in shrieks of delight. He gave the audience a peak of his washboard abs while giving his signature smile. 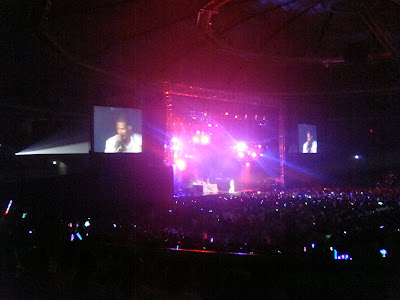 His microphone failed as he was just about to belt out Love in this Club, but picked it up quite nicely.

One of the sexier songs was definitely Hey Daddy.

The finale was OMG which got the crowd really pumped.


I was really surprised that there was no encore, though. There's been an encore at every single concert I've been to so far.

In terms of audience interaction, I thought there was very little of it. Granted, the Flo Rida concert I went to in May was on a much smaller scale, and Flo even jumped into the audience a couple of times.

Usher's concert seemed to be strictly choreographed. He came. He did his thing. And he left. Just like that.

After concerts I'm usually so pumped up from the artists performance, but after this one, I felt (to say it in Kong-lish for a lack of a better expression) so-so ^_^*
at July 04, 2010

Oh...so sorry to hear your slight disappointment. I know what you mean cause with concerts, you want audience interaction

Sheets, i was there as well. OMG, we could have met!!
Sean

OMG, Sheetal i was there as well. We could have met:(
Sean