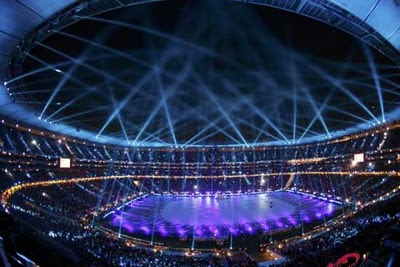 Image from Google Images
It came. It entertained. It deprived us of sleep. And now it's gone. The 2010 FIFA World Cup is over, and if you give me a quizzical look as if to say, "What the hell are you talking about?" then I'm going to have to slap you right here. Right now. You simply can't not know what I'm talking about. For the past month, and months leading up to it, the World Cup (soccer, in case you didn't know) held in South Africa, has headlined every possible form of media.

Honestly, I wasn't expecting to get caught up in the soccer hype, but online friends from almost every continent made it a lot easier to adapt to the erratic sleep patterns I endured. On some days, I was napping from 8pm to 10:30pm. Watch a game. Nap again and wake up at 3am. I'd stay awake till about 5:30am, nap till 6am or until I absolutely had to start getting ready for work.

Many people asked how I managed to teach my classes. Well, with great ease! It was at 3 or 4pm when it would feel like my body became sluggish, while I was still at work.

Last night I woke up at 1:30am to watch the Closing Ceremony - which was simply incredible. It was pointless going back to sleep, so I stayed up and watched a bit of the game (Spain vs Netherlands) but I kept dozing off. I woke up just in time to see the trophy being lifted into the air by SPAIN!

As someone who never followed soccer before, I had the best time watching, supporting, cheering and changing my nationality every day for the different teams that were playing.

Who cares if I didn't know the severity of yellow cards, red cards or penalties? I had fun anyway :-)

I think South Africa did very well as a host nation. I wonder what's next for Mzansi?
at July 12, 2010