On Saturday evening (March 6 2010), I ventured out to Seoul. After traveling for about 1.5 hours, I arrived at my destination. A friend invited me to a social gathering of his English Club. I met a couple of people, including someone who asked me, "Are you from India?" to which I replied "No" and she went on to ask, "So why are you wearing a bindi?" She was American.

Another girl (American) came over me to me and said, "I've been wanting to talk to you - I miss my Indian friends so much." I said to her, "Who said I was Indian?" She then asked if I was Pakistani, but I made her believe I was Egyptian for a while. Ha!

Why must people assume instead of just asking?

I also met two elementary school girls. One of their dads belong to the English Club. I was blown away by their level of English - they were able to converse with me. Ahhh what a dream if my students could do that!

I hardly took photos - just have this one lousy one which isn't really of anything - just the food table (and some people in the background).

I took a cab home and bargained with the cab driver on a set and reasonable price. It was quite amusing - I was sitting in the backseat while the driver was trying to find my destination on his navigation. He couldn't find my city or area...so I looked (it's in Korean) and found it! An hour later, I was home safe and sound. 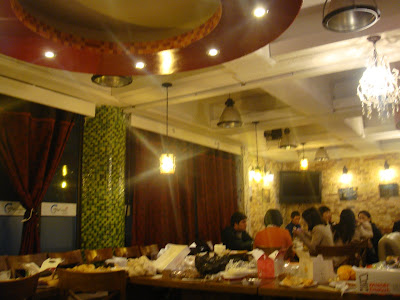