Whenever I fly (especially on international flights - mostly 10+ hours), I say a little prayer hoping that there are no crying babies on board. Nowadays we have MP3 players / iPods to block out wailing babies or children throwing tantrums while their parents do one of two things: 1) Hush them or 2) Ignore them.
I've just come across this article on the CNN site. It's something I've always said - and hope airlines will implement it ^_* What do you think?
By A. Pawlowski, CNN
March 16, 2010 -- Updated 1310 GMT (2110 HKT) 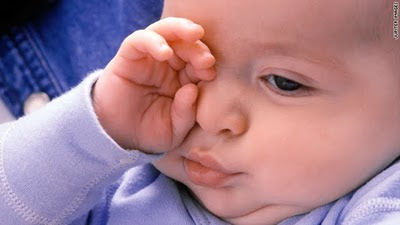 Many air travelers list crying babies as one of their biggest frustrations in flight.
(CNN) -- You're stuck in a cramped metal tube with hundreds of strangers for hours, when it invariably happens: A baby starts screaming and the passengers' collective blood pressure seems to rise along with the decibel level.

The issue of crying babies and unruly children on flights is a passionate one for air travelers.

Many say they're exasperated by parents who seem to do little to quiet or control their offspring, while others counter that fliers should be more patient and understanding.

The comment section of a recent CNN.com story about a smelly passenger being kicked off a flight soon diverted to a heated discussion about children.

"Babies should be banned from planes, movie theatres, restaurants, and any other public place for that matter.

The rest of the world doesn't think your kid is as cute as you do," wrote one poster.

"How do you expect families to visit relatives overseas without flying?" countered another. "The onboard entertainment is so good these days and headphones are cheap enough that a crying baby could be blocked out."

Some posters suggested that airlines should seat families with children in one section of the plane or offer flights for adults only.


YouTube even has a selection of videos of passengers reacting to crying babies, from the annoyed to the humorous.

The fact is that if you fly on commercial airlines, you will encounter babies and kids, some of whom will make their presence felt -- especially on a long flight.

"For babies, because they don't know how to talk yet, crying is their only way of communicating, and crying can mean a number of things: I'm hungry, I need to be changed, I'm bored, I'm cold, I'm hot," said Dr.
Jennifer Shu, a pediatrician in Atlanta, Georgia, and a CNN.com Living Well expert.

There is also the issue of ear pain when pressure changes in the cabin at the beginning and the end of a flight.

Babies aren't more prone to it, Shu said, unless they have an ear infection. But while adults and kids can chew gum or swallow to make ears pop, babies will respond by crying if they feel uncomfortable.

Read an excerpt from her book "Heading Home with Your Newborn"
Parents should remember that when they take their children on a trip, it's their responsibility to make sure the kids' behavior doesn't adversely affect other people, said Dr. Susan Bartell, a psychologist specializing in parenting issues and author of "The Top 50 Questions Kids Ask."

"The other people on the plane do not have to be subjected to your child crying. It is absolutely not something that they should be expected to endure. They can't leave," Bartell said.

"So if you're flying, it means that you may have to get out of your seat and walk around, pace the airplane and make sure your child has a pacifier and a bottle. You may be tired at the end of the trip, it may not be a great flight for you, but that's your job as a parent."

Our experts offered the following advice for parents and passengers:

Tips for parents with babies

• If a baby reacts to the changing cabin pressure, give it something to suck on -- a bottle or a pacifier, for example -- when the plane is taking off or making its initial descent, Shu said.

• If you can afford it, always buy a seat for your infant, instead of holding the baby on your lap, Shu advised. It's safer, and you'll have more room to maneuver, she said.

• Beware of trying to sedate a baby with over-the-counter children's medications. "People will try things to make babies sleep, like Benadryl or decongestants to help with the ears. In general, those medicines aren't recommended for kids under 2 years old," Shu said.

• Be prepared. Bring everything you need to keep a baby content, including toys and changes of clothing, and be ready to rock your child or walk around the plane with them if they cry, Bartell said.

• Always make an effort to quiet a crying baby. "If other people see you trying, even if you're not succeeding, they will feel at least you're ... doing your best to stop it. And they'll have some sympathy for you," Bartell said.

Tips for parents with older kids

• Keep children distracted by bringing along books and toys they have never seen before, Shu said, or have a small present that they can open every hour or two, depending on the length of the flight, so that the novelty will not wear off.

• Talk to older kids in advance about the behavior you expect from them on the plane, and agree on a reward or punishment that they may get later, depending on their behavior, Shu said.

• If a child feels tempted to kick the seat in front of them, let them kick your carry-on bag instead, Shu said.

• If there is a baby screaming and the parents aren't reacting, ask a flight attendant to say something to them, Bartell said. She advised against talking to the parents directly because they may be more likely to pay attention to a request from an airline employee.

• If a child behind you is kicking your seat, ignore it for the first time or two because it may just stop, Shu advised. If it continues, do speak to the parents, Bartell advised, saying in a nonhostile way, "You probably don't realize it, but your child is kicking my seat. Would you mind asking them to stop?"

• Glaring at the parents of a loud or unruly child may not always work. "Sometimes the parent is so thick-skinned and they don't care, so it isn't helpful," Bartell said.

• Give parents the benefit of the doubt. Shu, who flew with her son many times when he was an infant, recalled getting dirty looks from other passengers when she would board a plane. "When the kid never made a peep during the whole flight, they were very relieved," she said. "It might not be as bad as you're expecting it to be."