Today I attended Tulsi Viva at our mandir (temple). It was my first experience and was curious about its significance. Some of the info below has been taken from here and here.
Tulsi Vivah is the ceremonial marriage of the Tulsi plant to the Hindu god, Vishnu – or his avatar, Krishna. The wedding signifies the end of the monsoon as well as the beginning of the Hindu wedding season.
What is tulsi?
Tulsi is important in Hinduism and is worshipped in the morning and evening. Its name means “the incomparable one”.
Tulsi as a holy herb
Believers of Lord Vishnu (Vashnavites) worship the tulsi leave as it is believed to be the one that pleases Lord Vishnu the most. Worshippers even wear beaded necklaces made from the stem of the plants.
Hindu mythology says that Tulsi was a woman named Vrinda (a synonym of Tulsi) who was married to a demon king called Jalandhar. Thanks to her devotion to Vishnu, Jalandhar was invincible. He could not even be defeated by Lord Shiva (destroyer in the Hindu Trinity).
Shiva asked Vishnu (preserver in the Trinity) to help him find a solution to get rid of Jalandhar.
Vishnu then disguised himself as the demon king and is said to have violated Vrinda, and so her chastity was destroyed. Finally, Jalandhar was killed by Shiva.
Vrinda cursed Vishnu to turn black in colour and would be separated from his wife. …and so he was transformed into a black stone. In his Rama avatar, his wife Sita was kidnapped by a demon-king.
Because of the shame, Vrinda burnt herself on her husband’s funeral pyre. The gods of Vishnu transferred her soul to a plant…which was called Tulsi. In her next birth, Vishnu would marry Vrinda, so in the form of a stone, he was married to Tulsi.
The marriage ceremony resembles a traditional Hindu wedding with the deity as a groom and a Tulsi plant as the bride, who is draped with a sari and jewellery like earrings and necklaces. 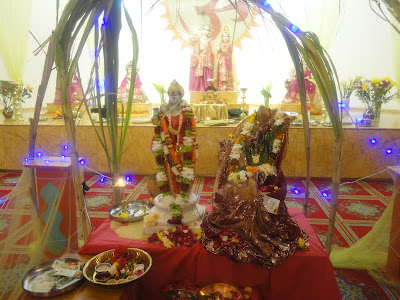 Usually daughter-less couples act as the parents of Tulsi in the wedding.