One of the best things about going to the movies is the popcorn, right? What do you think of this? Just read this on the CNN website: 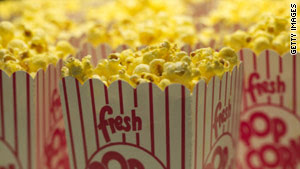 (CNN) -- Some silver screen couples were just meant to end up together: Bogey and Bacall, Harry and Sally, Saturday matinees and ... a cup of low-fat yogurt?

If Sony executives get their way, U.S. moviegoers will have the option of healthier snacks with their flicks -- and they won't even have to smuggle them in.


It's "the right thing to do for our industry, for audiences and for our country," said Lynton
Lynton's colleague, Sony's Executive Vice President for Global Communications Jim Kennedy, attempted to combat the causes of child obesity in his previous post with the Clinton Foundation.

With this new intiative, he revisits that effort, telling CNN that Sony is asking theaters to accommodate the 60 percent of parents who feel that their overall moviegoing experience would be improved if there were healthier options available at the concession stand.

The poll, conducted by Nielsen, also revealed that two-thirds of all moviegoers and three-quarters of parents would be more likely to buy sensible snacks from concession stands (Kennedy says that savvy moviegoers are already sneaking in raisins and granola bars) if they were available for purchase.

So what does this means for lovers of king-sized Sno-Caps (400 calories and 11 grams of saturated fat in a 3.1-ounce bag) and fishbowl-sized sodas (400 calories and 26 teaspoons of sugar in a 44-ounce medium iced soda at Regal, or a large at AMC or Cinemark theaters) -- as well as the theaters thatsell popcorn for a 900 percent markup?
Kennedy, himself a fan of a popcorn and M&Ms combo ("I go back and forth between the sweet and the salt -- though I wish the M&Ms came in smaller bags.") says neither set will suffer.

"We're not asking theaters to stop selling sodas, and we know most moviegoers are unlikely to change their habits. It just makes sense to offer more choices."
"It's a new source of income for theaters. They've already innovated by adding digital technology and more comfortable seats. This is consistent with that level of innovation," he said.

Representatives for The National Association of Theatre Owners and several major chains were unavailable for comment, but according to a SmartMoney.com interview with Warren Miller, senior equity analyst for stock tracking service Morningstar, of every dollar spent at the concession stand, 85 cents is profit.

A CNN Money feature from earlier this year finds that a medium bag of popcorn at most chains costs 60 cents, but retails for $6. Theater owners may be slow to invest in fare with a flatter return rate.

And just how unhealthy is that much demonized "buttery" popcorn topping? According to a December 2009 dispatch from the Center for Science in the Public Interest, one tablespoon of the non-hydrogenated soybean oil used by many chains adds an extra 130 calories, while the same amount of real butter topping pours on 9 grams of saturated fat -- or half a day's limit.

To put that in perspective, recommended daily intake for an average adult is 2000 calories, 20 grams of saturated fat and 1,500 milligrams of sodium. While, according to Jim Kennedy, the average American visits their local theater four times a year and this might not make a major nutritional dent, many families with children attend nearly once a week.

But why are modern day moviegoers in the habit of sitting back and massively snacking in the dark, anyhow? Kennedy says it would probably take a sociologist to figure that out.

Yogurt at theater? Good attempt but don't know how it will do

NICKI:
The best thing about going to the movies is the popcorn :-)