McKnight at Night in Seoul 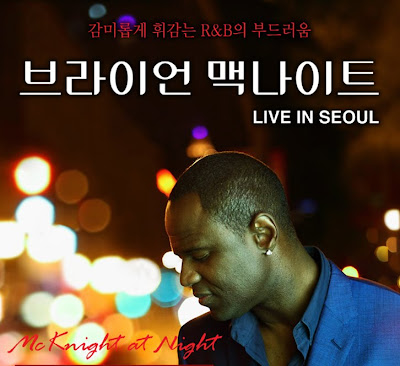 Last week, on Thursday, April 1 2010 R&B singer, Brian McKnight was in town for a concert titled McKnight at Night. My tickets were booked only a week before the show and the excitement built up also knowing that Korean heart-throb, Tae-Yang of Big Bang fame was going to open the show for Brian. 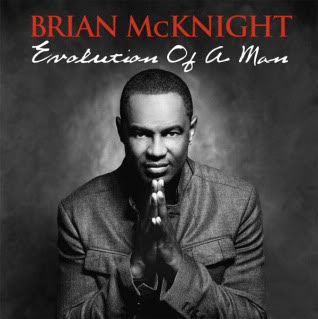 So after work, my friend YK and I endured a stuffy subway to get to Jamsil Stadium in Seoul. The first stop was to get our tickets before grabbing some grub. I recognized the venue as it was the same place where Big Bang had their concert back in 2008. 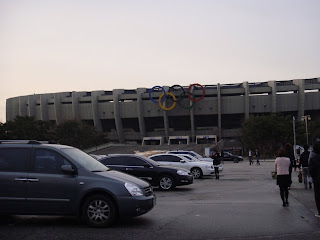 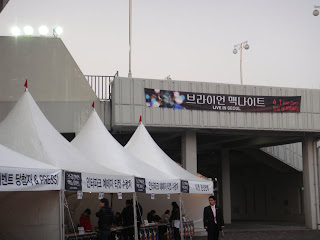 The only thing I was a bit bummed about was that we were sitting in full view of staff who were stopping people from taking pics. I took this one just before the concert started. 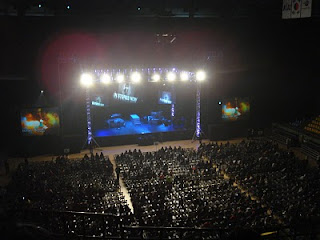 Tae-Yang performed Where you At and Wedding Dress. I tried to get a video, but only succeeded with 7 seconds. I saw tons of other people taking pics and vids, but I guess my luminous green camera stands out in a crowd - I don't know! Anyways... I missed his solo concert a while back, so I was pleased that I got to see him on stage again. 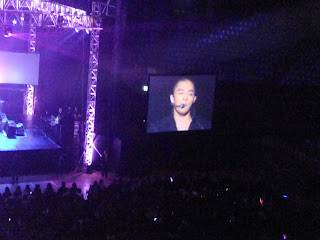 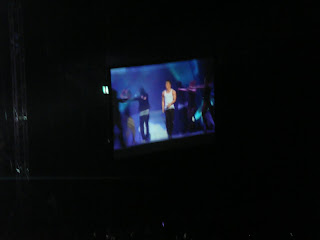 
At this point, I have to mention (and confess) that I didn't know many of Brian McKnight's songs. Although, my favourite number is Back at One. Apart from this song and a couple of others, don't ask me about titles!

After Tae-Yang's performance, two guys opened up on bass guitars. I elbowed my friend saying, "Hey, those are the guys from Burger King!" About an hour before the concert, YK and I had a mini gourmet dinner of fries and coffee (!) in the ice cold as the place (Burger King) was jam-packed.

A group of guys caught my attention because... well - foreigners in Korea stand out and one of them had dreadlocks with a beanie, something I'm sure I hadn't seen since I was in South Africa. They were wearing yellow waistcoats with STAFF written across the back. I thought they were just that...only to realize that the were Brian's sons - Brian Junior (BJ) and Niko who were on tour with their dad.

When Brian appeared on stage (a better view was to watch the big screens for extreme close ups!) I fell in love immediately. I don't know what it was - his smooth voice, his smile, the way he talks with his eyes, his half-unbuttoned shirt or his gyrating movements that left me wanting more even after the encore! 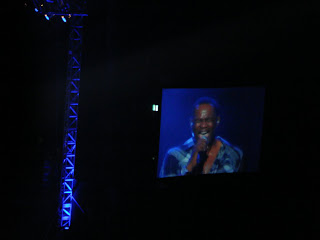 Here's a short clip of Brian singing Back at One

Brian called Tae-Yang back for a duet My Kind of Girl which rocked the crowd.
Note > This video is not mine.


Brian's sons, BJ & Niko performed for a short while, and even though they've probably done this plenty of times, I couldn't help but think how proud he (Brian) must be as a dad to share the stage with his two sons. Here's a pic of BJ - who, by the way has a killer voice. 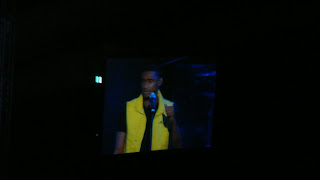 Brian also called a lady from the audience onto the stage. Her name was Joon and I know for a fact that every single woman in the audience were squealing and squirming in their seats as Brian grazed his finger over her cheek while he sang to her. I know this, because YK and I were doing just that! I don't blame Joon if she didn't sleep that night! 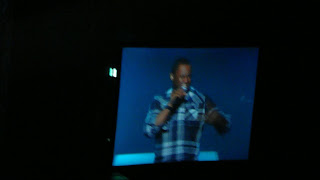 Part of whether I enjoy a concert or not is how much interaction and chemistry exists between the performer and the audience. Brian has performed in Korea before and I actually didn't know how popular he was here till recently. I felt that he had a good connection with the crowd which made me like him even more.

I think what makes this singer so sexy is that he doesn't even try. Sexiness seems to ooze so naturally when he sings and moves to the music. 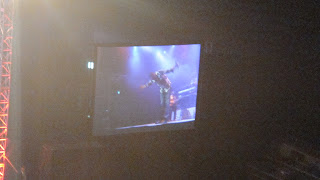 Usually after a concert, I leave as soon  as it's over to avoid the stampede to the subway station. I even missed Whitney Houston's encore to get out of the stadium quickly. But this concert... for this concert, I sat tight waiting for the encore. Even after it, I sat - just in case he came back!
Here's a clip of the encore: 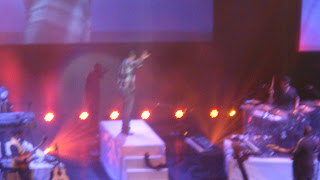 Of course I know I shouldn't do it, but I really couldn't help but compare this concert to the previous one I'd been to. In February, Whitney Houston kicked off her world tour in Korea. And it fell flat. She failed miserably to entertain and impress the Korean crowd and other reports claim that she was a flop in other countries too. Of course, she was performing after a decade, but still - was it an excuse for her to just sound plain stale and tired?

The following day, Brian and his team went over to Japan where they performed in Osaka and Tokyo.

Best post ever! :) I remember Brian and his oldies too. Taeyang is Taeyang....so hot! Thanks for sharing

sorry i read the post so late but i really enjoyed reading it. it almost felt like i was there. you are amazing yourself.