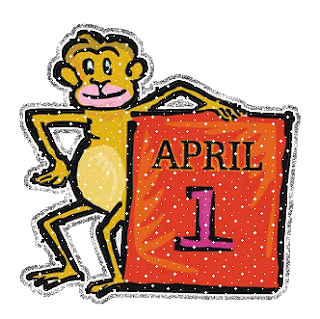 I've never April Fooled anyone before...until this year! I have no idea how the idea came to me, but I thought of catching my parents out.

I sent my mum & dad an e-mail telling them about a "big fight" I had with my co-worker after class. I told them that the school authorities got involved and that I was fed up and resigned. I went even further - to say that I was going to the immigration office the following day to cancel my visa and that I made a provisional booking to go back home the next week.

Mum called me with a bunch of questions about what was happening. She told me that she was going to make a few calls to try and arrange my belongings to be shipped back to SA. Throughout the conversation, I had to bite my tongue from laughing, even though I was smiling from ear-to-ear.

After we hung up, I sent both my parents a text saying, "April Fool's!!! GOT YOU! Hahahaha!"

It worked! ...and on my father - who can be a prankster at times, but is never (I mean never) caught out!

So I figured if it worked on my parents, it could work on a few friends in Korea! I sent a text to a few people saying that I suddenly had to go back to South Africa and I apologize if I don't get to meet them to say goodbye. A few people were sharp and replied saying "Ur kidding" while others sent long soppy messages about how they were going to miss me.

The rest of them eventually figured out that I was April Fooling them ;-)

However...a week later, I realize that a select few STILL don't know that I was kidding. Oops!

ANONYMOUS:
You're just hot because I GOT YOU!!!!!

hahahaha!!!!!! will get you soon too. watch out girl