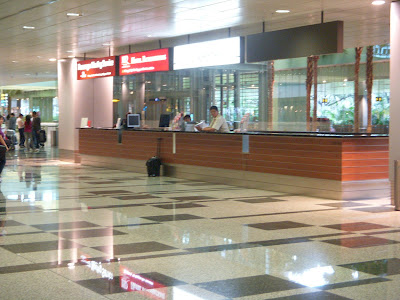 Hotel booking desk at Changi Airport
Getting to the airport isn't just a matter of calling a cab. From my apartment, I need to get a cab to take me to a certain bus stop. Most of the flights I've taken have been early morning, so I have had to find a cab around 05:30.

Once I get to the bus stop, I have to wait in the ice cold for the airport limousine (bus). Depending on how friendly the driver is, I have to lug my luggage up the stairs onto the bus.

Anyways, an hour later I arrived at Incheon Intl. 6 hours later, I arrived in Singapore.

I didn't make any hotel reservations before I left. A friend advised me to book my hotel from the airport - apparently, the rates are MUCH cheaper.

I did just that. It was Christmas Eve, and as one can imagine...prices were very high.

I chose to stay at the Orchard Parade Hotel, and was *very* lucky to get such a good deal. A few minutes later, I took an airport/hotel shuttle and off I went.