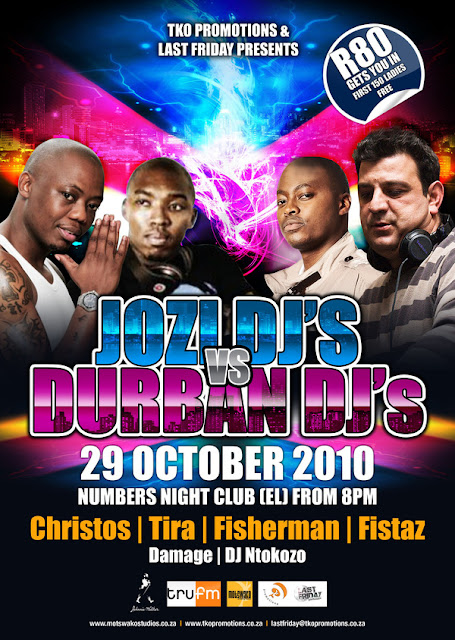 This was my first Last Friday Party, and I was excited as ever. The event was going to be Jozi DJs vs Durban DJs and the line up included: Fistaz Mixwell, Christos, DJ Tira and DJ Fisherman. Numbers was packed to capacity that they even had to close the door and refuse people in! I spent the whole night in the DJ box - which I think was a safe & wise thing to do! Fistaz didn't make it after all, but OH HOT DAMN! The other DJ's sure made up for it. My brother and I both agree that Tira isn't just a DJ - he's an entertainer and performer. Loved his set!

After the gig, I tweeted a bunch of things with the hash tag Things I Learned Last Night:

...you can get high JUST on music.
...how much I really love Kwaito music.
...that DJ Mo exists in different sizes and forms (and different names) > Intersexions
...sometimes I'm safer jamming alone in the DJ box.
...I have no tolerance for jezebel's after midnight.
...saying I'm the DJs sister will make guys take a back step - literally.
...you get DJs and then you get DEEJAYs.
...I STILL don't get what's behind wearing shades in a club.
...It's pointless trying to rationalize with a girl in a blonde weave at 04:30.
at October 31, 2010