When I heard that Elizabeth Gilbert's memoir, Eat Pray Love (EPL) would be delivered to us on the silver screen, I must admit that I was a bit skeptical. I’m not easily swayed when books are turned into movies.
I read the book sometime last year and I wanted everyone I knew to read it as well.
It's the kind of travelogue that makes you want to chat about it with a friend over coffee. You'll want to salivate over the pizza in Naples, you'll want to learn more about the tradition of arranged marriages in India and you'll want to discuss the colourful characters the protagonist meets in Bali.

When I heard that Julia Roberts would star in the film, I couldn’t imagine anyone else essaying the role of Elizabeth Gilbert. Perhaps it could just be a hit. I've waited a long time to see this film (friends in the US saw it back in August already!) so on Friday, October 7 2010 my mum and I watched it together.

“I want to go some place where I can marvel at something.”

This is what Elizabeth (Liz) Gilbert tells her friend after realizing that she has “no pulse”. A woman who should have been happy with what seemed like a full life (a career, husband and new home) she felt like she was in a rut and as a result, she lost her thirst for life.
Many of us can identify with this feeling. Why am I here? Who am I? 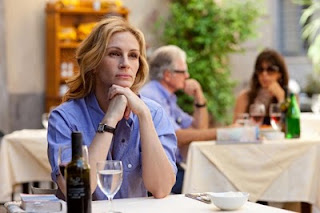 She decides to pack up and travel to three countries over a year: Italy (Eat), India (Pray) and Indonesia (Love).  On this journey, she will attempt to rediscover the true meaning of life and herself.
In Italy, she discovers the pleasure of eating. In India, she realizes the power of prayer and finally in Bali, she finds her balance – love, in the form of a charming Brazilian man.
When she arrives in Rome, Liz says:

"I remember an old catholic joke about a man who spent his whole life going to a church every day and prayed to the statue of a great saint begging "please, please, please, let me win the lottery." Finally the exasperated statue comes to life and looks down at the begging man and says "my son, please, please, please, buy a ticket." So now I get the joke, and I bought three tickets."

Staying at an ashram in India, she meets “Richard from ” who also imparts some knowledge to Liz.

"If you could clear you all that space in your mind, you would have a doorway. And you know what the universe would do? Rush in." –Richard Jenkins

Speaking of her time spent in India, she says:

"So the holy truth of the whole adventure here in India, is in one line: "God dwells within you...as you." God's not interested in watching a performance of how a spiritual person looks and behaves. The quiet girl who glides silently through the place with a gentle, ethereal smile...who is that person? It's Ingrid Bergman in "The Bells of St. Mary's" – not me. God dwells within me...as me." 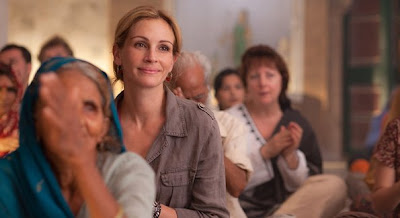 On the last leg of her journey, Liz visits Ketut – a toothless medicine man she met on her previous trip to
We don’t have to wait long before we see Liz falling into the arms of the sexy, suave and single Felipe, played by Javier Bardem. A man who also has a background with scars, in one scene he tells Liz, “You don’t need a man, you need a champion.” 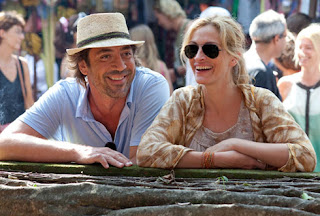 When he proposes that Liz take a boat trip to an island with him, she panics. He asks her to look him in the eye and to tell him whether she loves him or not. She can’t.
It’s time to leave Bali, so she makes a last visit to Ketut and tells him that she broke it off with Felipe. The sweet old medicine man tells her, “To lose balance sometimes for love is part of living a balanced life.”
In a dramatic fashion, Liz rushes to Felipe’s home and leaves a note for him to meet her on the dock at sunset.


...and he does! Rewinding back to her time in Rome, when her Italian friends asked her what her “word” is, she said “writer” but they told her that’s what she does, it’s not who she is.
So she tells Felipe she’s discovered her word – and tells it to him, which means: “Let’s cross over together” In pure Hollywood (dare I say Bollywood) style, the two - literally - sail off into the sunset. End credits. 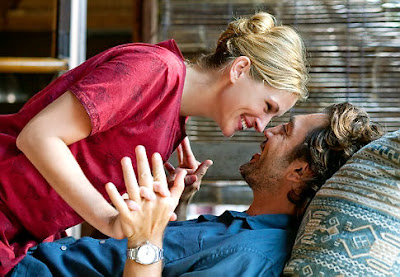 I feel like I need to watch the film again. Like Liz, you need to empty your mind and be prepared to take the journey across oceans and continents - which lasts just over two hours.
How did I feel after watching EPL?
...that it's not that uncommon to have that sinking feeling of what my purpose in life is.
...that I shouldn't feel guilty about having everything I need, but still not feeling a sense of fulfillment.
In an interview, Julia Roberts says what she likes about the film is that it's about two grown people with a past and baggage, yet they still want to make it work.
We all have a past - skeletons in our closet, lies we've told. Arguably, we begin a new slate everyday when we wake up, but the truth is that we wouldn't be who we are today if it weren't for our past experiences and encounters with other people. While some of those encounters may be wholesome for our souls, others could break our hearts. Failed relationships and broken friendships sometimes make us feel like we've hit rock bottom. Losing people we love and care for is never easy, but what we don't realize is that things happen for a reason. We may not understand why at the time, but a few months or years down the line it will all fall into place, like a puzzle!


Sometimes because of the hurt caused by other people and circumstances, we turn the key on our heart and feelings and as a result, we turn into stone. We begin not to trust others, in fear of the cycle repeating itself and getting hurt all over again. This leads to lost opportunities. The secret, I have realized, is to let go completely of everything holding you back. Remember, you can't move forward if you keep looking back.


There's more that I want to say (write) but I think that deserves a blog post on its own. To sum it up, I enjoyed the film but here's a friendly warning: Please empty your bladder before you enter the theater, else you will have to make a restroom run during the film...and you'll end up losing bits and pieces of vital information (before the restroom run, during and after...as you settle back in!)

If you still haven't seen EPL, take a look at the trailer below: