Chatterbox July '06: Journalists are human too

I decided to pursue a career in Journalism about six years ago, and since then I have had work that has been published locally and internationally. I have covered a variety of topics and have been lucky to meet interesting and exciting people.

While writing is and always has been my first love, I have found a new field of interest – the world of broadcast and the exiting medium of Television. When people know that I am in this field, they often have the misconception of me reporting at war scenes with bombs blasting behind me. However, news reporting is not what I want to pursue. Rather, I am interested in visiting communities and doing human interest stories that affect ordinary people.

I recently worked on a 24-minute documentary about a group of people who lived off a rubbish dumpsite. The site is being moved to another location, and an entire community’s livelihood is being taken away - just like that. We visited the squatter camps on numerous occasions so that the local folk could familiarize themselves with us.

At the rubbish dump, I met families who shared their grievances with me. I met elderly people who were tired of complaining and just accepted that they were destined to live such unfortunate lives. But what really touched me was a family who had a seven week old baby. When I met the mother of the baby, she told me how they hardly had food for him and that he didn’t have enough clothes. At the time of meeting the family, it was freezing cold and the baby had minimal clothing on. Needless to say, my heart broke for this helpless child. 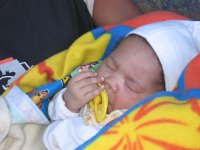 Later that day, I couldn’t stop thinking about the baby I held in my arms. He was oblivious to the atrocious environment he was living in. “It’s just not fair”, I thought to myself. Some people will argue that people who live below their means should know better than to have more children than they can support, but my concern lies with the baby. He didn’t ask to be born, and it’s not his fault that he lives in a shack filled with flies and rodents.

I couldn’t get the images out of my mind. Here I was sitting in my comfortable home wearing warm clothes and eating a decent meal, when I just witnessed people competing with dogs and pigs for the leftover food of others on a rubbish dump. It seemed absurd to me that people could lead such a life.

I still couldn’t get the baby out of my mind. I’ve always thought that pitying people is of no use if we don’t actually do something for them. I decided to buy a few essentials that any newborn would need. It felt so good to give it to the mother, who was deeply grateful and appreciative. I felt that it was the least I could have done. After all, I consider myself to be very privileged and fortunate.

Throughout my academic studies of Journalism and Media Studies, I have been trained that as media practitioners, we have an obligation to society – to entertain, inform and tell the truth. Probably the most important rule about Journalism is that we have to be objective and impartial about the stories we produce. We are cultural carriers and the public rely on us to provide the most accurate information about various issues. It is of the utmost importance that we divorce ourselves from the subject we are researching on.

So far, I thought I was doing a good job about remaining objective with my stories. After all, you hear two different sides of an argument, but when you present it to the public, you can’t voice your own opinion. And if one gets personally involved with a particular story it will surely influence the end product. Another example was of a rape demonstration march that I had to film. That day, as much as I wanted to be a supporter for women’s rights, I had to forsake that role and be a journalist.

As for the story I was researching about the people living off the rubbish dump, my mother said to me, “You’re not supposed to get emotionally attached to your stories, and you are”. I didn’t realize how emotionally involved I was becoming. As strange as it seems, in the sphere of Journalism, I feel as though I must consider myself a journalist first, and then a person. But this time, I let it slip. And there’s nothing wrong with that.

Basically, all I’m trying to say that as media workers, we are meant to remain impartial and fair to all parties, but sometimes that isn’t always easy. And as difficult as it seems at times, I have to realize that journalists are human too. We have feelings like everyone else. We cringe at the sight of people scavenging like animals in garbage, and believe it or not, we shed tears…even if it is behind a camera lens. 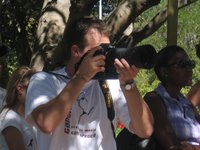 Email ThisBlogThis!Share to TwitterShare to FacebookShare to Pinterest
Labels: chatterbox

Sheetal what a interesting article,I truley understand what you are talking about....the occasion was not quite that bad..but an spousal aduse...with children..My heart went out to the mother and children..and I had to do something for them.....
Vivian
your USA friend....

1stly da artical is brilliant!
i tink dat ders absolutely not a problem wit becumin a lil attached 2 ur story or get emotionally involved-it shows dat u hav compassion- which u hav TONS of by da way:)

neways
it was a pleasure readin ur artical.

oooopzz. Sowy bout al da spellin mistakes. u knw how bad i am at dat isnt.

Thanks for reading my column and for the comments! Missing you stax...

I think journalism can be one of the toughest jobs - you come face to face with a dreadful reality... I didn't realise that it had to be objective, but it makes so much sense. Sho, much heart-strength to you for the difficult things you need to filter! The amazing thing is how brilliant you are & that this is what you were made for - communicating truth. I think its an honour to be able to do that well.

Big love to you!
Lyds

i thouroghly enjoyed ur article, n i was thinking to myself if u are no a passionate being then u wld never have pursued journ with all u have, thru think n thin. so why loose that passion now because the would tells u that "dont get attached" best stories are written when u feel such empathy and u are passionate enough to want the rest of the world to know bout it. at the end of the day u carry ur work not only on paper/articles/magazines, but also in ur heart, with a feeling that only u can understand. love u, dont ever loose ur passion...