Mistress of Spices - a disappointment 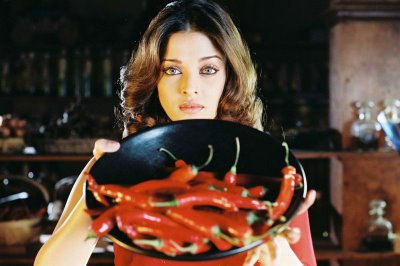 I've just come back from watching The Mistress of Spices. It stars Bollywood actress, Aishwarya Rai and the dreamy Dylan McDermott and is based on the novel by Chitra Banerjee Divakaruni of the same name.

The story revolves around Tilo - a young woman who has a vast knowledge of the world of spices. She has a unique ability to look into people's past and future and with her special powers, she is able to help those who approach her with problems.


In order for her remedies to work, Tilo must obey three rules: 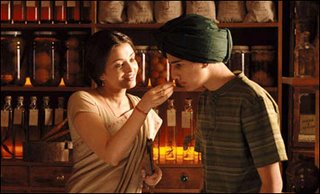 There is hardly any surprise when her temptation, in the form of Doug, enters Tilo's store after being hurt in a minor accident outside her store. As he visits the store on a regular basis, Tilo wonders if there is more to her life than merely helping others. She begins to fall in love with Doug, and because of this, the spices punish her - by making all the people Tilo has helped, suffer. So she has to choose between her calling in life - spices, or Doug.

The director, Paul Mayeda Berges is married to Gurinder Chadha - one of my favourite filmmakers. She brought us films like Bend it like Bekham and Bride and Prejudice - also an Aishwarya-starrer, and will soon be presenting us with the film version of the popular TV series, Dallas. I was a bit disappointed by Mistress of Spices. I have the novel which the film is based on, sitting at home waiting to be read, so I can't really comment on whether the filmmakers did justice to the original story.

I have never been much of an Aishwarya fan. No doubt, the lady has beauty and although she was dress in plain sari's throughout the film, she remained beautiful - especially towards the end when she wore the red sari trying to seduce Doug. However, I found her to be weak in emotions throughout the film. Her facial expressions hardly indicated that she was a lonely Indian woman stuck between her traditional beliefs and 'forbidden' passions. 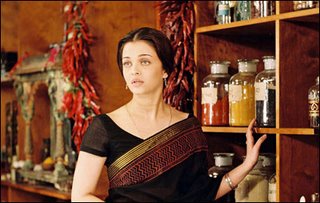 Other area's which confused me was each time we heard a noise outside Tilo's store. Was it a gun fire? Was it a car backfiring? And what about Doug's flashback to his childhood? I may have drifted away for a few seconds, but I lost the plot when his mother took him to what I assume was a Mexican family. Then one of Tilo's loyal customers - Harun and the girl who lives next door. Why didn't we see a relationship develop between the two? We assume that they will be married, as Tilo gives Harun something which she says he must put on her on their wedding night. But as I've said - we don't see a relationship between the two. All I took from it was that they were neighbours.

Anumpam Kher, who appeared in Chadha's previous films like Bend it like Bekham and Bride and Prejudice was, I think, wasted...as with Shaheen Khan - who played the mother of gangster-turned Jagjit. Khan and Kher played Parminder Nagra's parents in Bend it like Bekham and also had a role in one of Chadha's earlier films, Bhaji on the Beach - as did Zohra Segal, who played Tilo's mentor. I was surprised to see Padma Laxmi playing Kher's granddaughter in the film, and thought she was a bit weak for her part.

Many people may disagree with me, but it seems as though Berges made the film entirely about Aishwarya. No doubt, she is the central character, but it appears as though she is there just for her flawless beauty. The script had so much potential, and it's a pity that the essence of the story fell through the cracks.

On the other hand, I enjoyed the cinematography. I suppose being a TV student, I appreciated the stunning, colourful shots of the various spices. Besides that, I think the filming was straight forward and nothing to write home about.

In short, I was looking forward to watching the film, and I'm disappointed that I was let down.
at September 23, 2006

sounds like a timepass film. your comments about aish are spot on, so far the movies i've seen with her she gives shallow performances. well no she was ok for the first half of hum dil de chuke sanam but the rest was beyond her.

I think the hottie (Dylan McDermott) made the movie - he is so dreamy. Other than that I thought it dragged on a bit.

Ranjit, I wonder how Aish's performance will be in "Umrao Jaan"?!

Yeah with u there sheetsi - yay so excited greys has started again :)

I too waited to watch this movie, however to much disappoint it was not that exciting. Lets hope that there arent many of these boring movies. I look forward to the typica indian movies, good story, mixture of comedy, interesting fashion, culture and the lovely songs.

Thank you for sharing your obervations on "Mistress of Spices", I haven't seen it yet, but definitely plan to. The only thing that has been stopping me is that I'm not a huge fan of Aishwarya - and when you say it appears as though she is there just for her flawless beauty it makes me cringe a little. Anyway, will just have to grin and bear it I suppose! :)