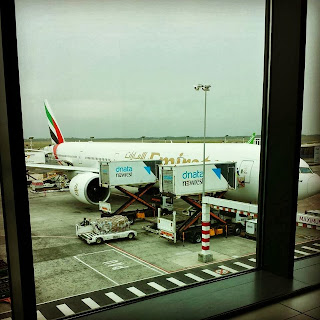 I had been so busy preparing for my LOA (leave of absence) that I hadn't really given myself time to become excited about my first trip to Malta.

Contrary to many other trips I've been on and had sleepless nights the night before departure, I slept quite easily this time. I woke up in the morning feeling a bit out of sorts...almost emotional.

There's an Academic Year Coordinators Meeting, and since I'M an AYC, it was a great surprise to know that I would be traveling before the end of 2013. I don't hide the fact that I am grateful. SO grateful to have a job. In the past I have been quite expressive about my very dark phase of trying to find work when I came back from South Korea. The only thing that got me out of that funk was gratitude.

I began in December 2011. Five or six months later, I started getting more responsibilities. Seven months after I started, I was offered a promotion. I assumed the position in January 2013 and in July it was announced that I would be the first AYC to travel to Malta for this meeting.

As many would know, living alone comes with many responsibilities - as little as trying to remember to turn off all plugs and the geyser when traveling for a couple of weeks or more. I did all this - with the help of many lists!

At precisely 10:00, I was on my way to CPT International. A million thoughts running through my mind, but mostly my mental checklist hoping that I hadn't forgotten anything. Before long, I was seated and ready to take to the skies.