I received this in an e-mail some time back... not quite sure how true it is.
The History of the Middle Finger 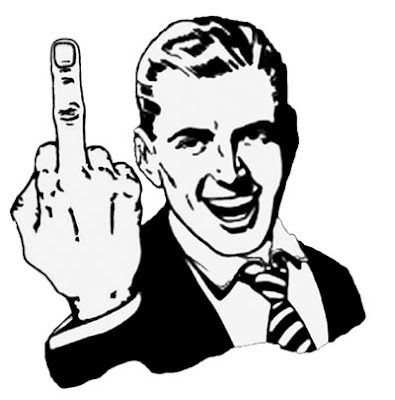 Before the Battle of Agincourt in 1415, the French, anticipating victory over the English, proposed to cut off the middle finger of all captured English soldiers. Without the middle finger it would be impossible to draw the renowned English longbow and therefore they would be incapable of fighting in the future. This famous English longbow was made of the native English Yew tree, and the act of drawing the longbow was known as "plucking the yew" (or "pluck yew").

Much to the bewilderment of the French, the English won a major upset and began mocking the French by waving their middle fingers at the defeated French, saying, See, we can still pluck yew! Since 'pluck yew' is rather difficult to say, the difficult consonant cluster at the beginning has gradually changed to a labiodentals fricative F', and thus the words often used in conjunction with the one-finger-salute! It is also because of the pheasant feathers on the arrows used with the longbow that the symbolic gesture is known as "giving the bird."

IT IS STILL AN APPROPRIATE SALUTE TO THE FRENCH TODAY!

Email ThisBlogThis!Share to TwitterShare to FacebookShare to Pinterest
Labels: trivia

Happy Happy Birthday Sheets. I'm two day's late in wishing you, but I hope that you had a fantastic day. All our love, Chantal & Dominique

Chantal
Thank you for the message!
Love & hugs xx

Do you have copy writer for so good articles? If so please give me contacts, because this really rocks! :)